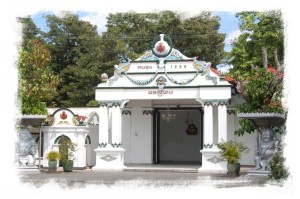 Yogyakarta is not only the capital of the special district, but also the most important center of Java in the field of art and culture. Here the various art-forms are developed to a very high level. It is here that one can find the outstanding batik dress, the Ramayana ballet, gamelan music, beautiful silverware and the mysterious puppet show with traditional leather shadow puppets. In Yogyakarta and the surrounding area you will find many attractions well worth a visit. Among these are the Borobudur and Prambanan, the two world famous temple complexes.  Some seventeen kilometers southeast of Yogyakarta is Imogiri. Here is the official cemetery of the royal families of Yogyakarta and Surakarta. There are several tombs of rulers of Central Java. Many sultans of Mataram and the sultanates of Surakarta and Yogyakarta are buried here. Sultan Agung had this cemetery built in 1645. An attraction of a different sort is Mount Merapi ("Mountain of Fire"). This 2968 meter high volcano is located 35 km north of Yogyakarta. It is one of the most active and dangerous volcanoes in the world. Merapi in fact is an ongoing threat to Yogyakarta and surrounding villages. The last major eruption took place in 2010, when Kaliurang village - located at the foot of the volcano - was almost completely destroyed. Hundreds of people died and thousands were injured. In Ketap,  located east of Magelang,  the lookout Ketap Pass offers - weather permitting - stunning views of Mount Merapi and the (adjacent) Merbabu volcano. But also within the city limits Yogyakarta has a lot to offer. First of all, the walled Kraton, the palace of the Sultan of Yogyakartathe, situated in the center of the city. The oldest buildings of the Kraton date from 1756 and were founded by Sultan Hamengkubuwono I. Since then the sultan resides here. So now the current sultan Sultan Hamengkubuwono X resides here. The Kraton is a fine example of Javanese palace architecture with a number of luxurious rooms and elegant spacious courtyards and pavilions. The palace is only in the morning open to the public. The tours are provided by traditional Javanese dressed palace guards. Just southwest of the Kraton is the Taman Sari Water Palace, the former royal garden of the sultan. Of the original is not really much left. In fact, only the central bathing complex, with the tower from which the sultan could watch his harem women bathing is in reasonable condition. Not far from the kraton and the water palace is the famous and colorful bird market (Pasar Ngasem), where especially songbirds and pigeons are sold. But you can also buy all sorts of other animals, from snakes to geckos and iguanas to bats. For those looking for souvenirs is Jalan Malioboro, the most famous shopping street in Yogyakarta, well worth a visit. This is a busy and lively shopping area with on either side a chain of shops, restaurants, stalls, food stalls and eateries. Numerous street vendors are trying to sell their wares. But here are also buildings from the Dutch colonial era as the Main Post Office (1910) and Bank Indonesia (1923). A little further lies Fort Vredeburg (1900-1940), in which now houses a museum dedicated to the struggle for independence. Opposite is the former Resident House (1823). Nearby is the Pasar Beringharjo, the largest local market in Yogyakarta.  For the real batik lovers there is the Batik Research Center, located in the eastern part of Yogyakarta. Here one can see closely how batik products are made​​. For refined silverware one must be in Kota Gede, five kilometers southeast of Yogyakarta. In this historic suburb are located several local workshops  where you can see how craftsmen hand make the finest silver works of art.