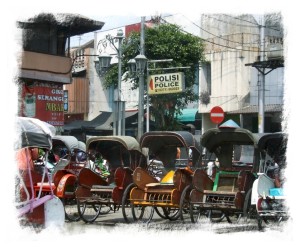 Solo - the official name is Surakarta – is located 60 miles northeast of her sistercity Yogyakarta. The city has a rich Javanese history, culture and tradition. It is a former royal city with two royal palaces within its borders. The first is the Kraton Kasunanan (also: Kraton Surakarta), built in 1745 and home of the Pakubuwono kings. A considerable part of the structure was destroyed by fire in 1985. Partly rebuilt, however, it has has lost much of its grandeur. The most striking feature of the building is the Panggung Songgo Buweno, an octagonal  tower with four floors built in 1782. The other royal palace is the Pura Mangkunegaran, the seat of Prince Mangkunegara. This second palace - founded in 1757 after a bitter family quarrel - is in substantially better condition. The center of the complex is formed by the pendopo, a pavilion erected in a mixed Javanese and European style. In the museum of the palace are plenty of interesting objects to see from the personal collection of Prince Mangkunegara VII. Solo also is the home of the largest manufacturers of batik in Indonesia. It’s therefore no surprise that the largest batik and textile market in Indonesia - Pasar Klewer - can be found here. For real batik lovers, the Batik Museum Danar Hadi a must. It has more than 10000 pieces and thus holds the largest collection of batik in the world.

Approximately 15 km north of Solo in Sangiran is the Sangiran Early Man Site, an important archaeological site. Here are found fossils of the first ancestors of the human being, the Pithecanthropus erectus (the "Java Man"). Several of the excavated skeletons can be seen in the well-appointed new museum in Sangiran.