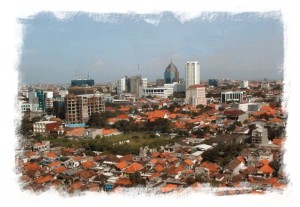 Surabaya is the capital of East Java and with approximately three million inhabitants the second largest city of Indonesia. The multicultural city is located in the northeast of Java at the mouth of the River Mas. At the north and east of the city is the Java Sea. Being a port from which products such as tobacco, sugar and coffee are exported, it plays an important role in the economic development of Indonesia. The name of the city would be taken from Sura (shark) and Baya (crocodile). Surabaya is known as the “hero city” because of the role it has played in the struggle for independence. The Heroes Monument (Tugu Pahlawan) reminds of this. Surabaya is certainly not the most favorite tourist destination of Indonesia. Yet it has to offer a few interesting sights. First, there is the port Kalimas, the old port of Surabaya, where one can see how the traditional and colorful Buginese schooners unload their cargos. Further south is "Old Surabaya", the old historic center and the most attractive area of ​​the city. In this area you will find a few buildings from the Dutch colonial era. Here is also the House of Sampoerna in a stately colonial building. One can see here the manufacture of hand-rolled kretek cigarettes. There is also a museum housed here. The multicultural character of the city is emphasized by the presence in this area of ​​an Arab neighborhood and Chinatown. In the Arab quarter a warren of narrow streets leads to the Masjid Ampel Mosque from 1421. It is the oldest and most sacred mosque of Surabaya and it forms the heart of the fascinating Arab quarter. In the often narrow streets of the Chinese district there arefound numerous shops, eateries and other types of businesses. Nearby is the Hong Tiek Hian Temple, the oldest temple in Surabaya. On the south side the old town is bordered by the historic Red Bridge (Jembatan Merah). In 1945 this bridge was the scene of heavy fighting between British soldiers and freedom fighters during the struggle for independence.