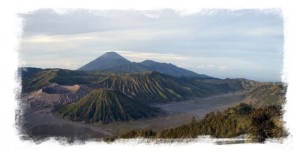 For many, a visit to the Bromo volcano is one of the absolute highlights of a Java journey. Bromo, which is part of the Tenggermassif, is located in the Bromo Tengger Semeru National Park. It is not the 2392 meter high volcano Bromo itself that makes it a special attraction, but rather its location is unique and unsurpassed. Bromo volcano is situated along with two other volcanoes in a giant sand flats of 8 to 10 kilometers at an altitude of about 2100 meters. These sands – the Tengger Sand Sea – has ever been caused by an eruption of the giant Tenggervolcano. The stretch of sand is actually the crater of this old erupted volcano on which a number of new volcanoes have formed thereafter again. In addition to the Bromo the Batok (2470 m) and the Kursi (2581 m) have been formed on the sands. Of the three, the tree-clad Batok is no longer active. The sea of ​​sand is in turn again surrounded by the steep rising large crater wall of the old Tenggervolcano.

At its most beautiful is the Bromo and the surrounding volcanic landscape at sunrise. There then gather in the early morning large numbers of visitors to watch the colourful spectacle of the sunrise. A popular lookout point to see this unforgettable spectacle is on the top of the 2770 meter high Mount Penanjakan, one of the mountains that surrounds the sands. Realize that the morning can be icy cold here. It is also possible – via a staircase with over 200 steps – to reach the rim of the crater of the volcano. From there one can look into the turbulent crater and hear the rumbling closely. And of course also from the crater rim, the sunrise and the view over sand sea is breathtaking.

Incidentally, the area in and around the national park is inhabited by the Tengger people, one of the few Hindu communities in Java. Their presence here, according to tradition, is the result of advancing Islam in the fifteenth century when many people fled to inhospitable regions to profess their own religion. To the Tengger people the Bromo volcano is of special religious significance. They believe that the god Brahma resides here. Once a year they come to Bromo to throw offerings in the form of rice, vegetables, chickens and other objects in the crater. In 1993, at the foot of the Bromo, a Hindu temple (Luhur Paws) was built.

In the south of the Bromo Tengger Semeru National Park is a second volcanic complex. This complex includes Mount Semeru, with 3676 meters the highest mountain in Java.