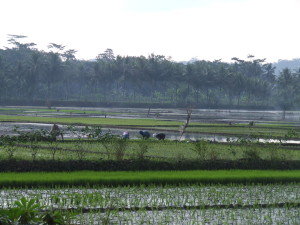 Of the more than 17,000 islands of Indonesia Java in fact can be regarded as the beating heart of the nation. The island is 132,000 square kilometers and has 143 million inhabitants and is the most populated island of Indonesia. The capital of Java and also of Indonesia is Jakarta. This immense city in the northwest of the island has more than 10 million inhabitants. On the green Java, situated between the islands of Sumatra and Bali, are plenty of sights which are worth a visit. Sights of very different kind. On the one hand, Java has a number of large metropolises, including Jakarta, Bandung and Surabaya as the best known. On the other hand it also has to offer an enchanting natural beauty. The lovely little villages are interspersed with colorful rice fields (“paddies”) and typical tea, coffee, cocoa and rubber plantations. To the miraculous nature of the island contribute not in the least the many volcanoes at present here. Of these volcanos the Bromo and Merapi – belonging to the sixteen most dangerous volcanoes in the world – are the most famous ones. In addition, one can become acquainted with deep traditions – especially in Central-Java and Yogyakarta – which manifest themselves in a variety of interesting artificial forms. Who does not know the subtle art forms like those of really beautifully crafted batik textiles, wayang puppets and gamelan music. Furthermore, Java has the oldest and most important history of Indonesia. The presence of ancient temples (with the Borobudur and Prambanan as famous examples) and palaces (like the kratons in Yogyakarta and Solo) testify to this. And to those turbulent history also belongs definitely the colonial period, whose traces on the island are still plentiful. In other words, on the magnificent and exciting Java is so much to see that this island is well worth your visit.