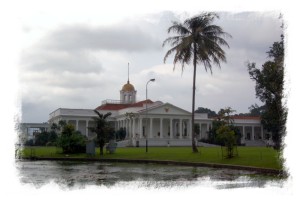 Some 50 km south of Jakarta, is Bogor. The city is located at an altitude of 290 meters at the foot of the Salak Mountains. In 1745 it was founded as Buitenzorg by the then Dutch Governor General Van Imhoff. Bogor has over the years developed into an important economic, scientific, cultural and tourist center. Especially in recent years, the population of the city exploded. At the present time the city approximately has one million inhabitants, of which 87% of Sundanese descent. Because of the relatively numerous rain showers Bogor is also known as the rainy city. The city is surrounded by volcanoes (including the Gunung Salak and Gunung Gede ), rice fields, coffee and tea plantations. However fame derives Bogor in particular to the Botanic Gardens ( Kebun Raya Bogor ), located in the centre of the city. This complex – opened in 1817 as ” the country’s Botanical Garden at Buitenzorg ” –  is the oldest and most interesting botanical garden in Indonesia. This world famous botanical garden, which covers an area of about 87 acres, has more than 15,000 beautiful exotic plants and trees, including 400 palm species. There is also the Orchid House where one can admire many species of this wonderful plant. Particularly attractive is the large lotus pond with giant water lilies, which is adjacent to the Presidential Palace ( Istana Bogor ). The current palace was – after the previous was devastated in 1834 by an earthquake – in 1870 the official residence of the Governor-General of the former Dutch East Indies. After the independence the residence was in use as presidental palace by President Sukarno. Today it is exclusively still for the reception of high foreign guests. Furthermore Bogor has some fine museums. Among these is the Zoological Museum to be the best known and most interesting. The museum is part of the complex of the botanical gardens and is located near the entrance to the gardens. It was opened in 1894 and is one of the oldest in the country. In the museum there are plenty of interesting collections, in particular on the Indonesian animal world.