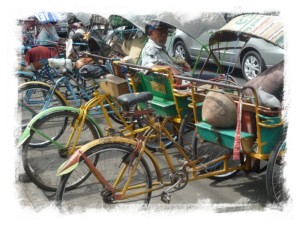 Malang is the second city after Surabaya in East Java. The city has developed rapidly and now there live more than one million people. It lies at an altitude of approximately 450 meters and was in colonial times very popular with the Dutch because of its mild climate and its attractive location surrounded by two beautiful majestic mountain ranges, namely the Kawi Butakmassif in the west and Tengger Mountains in the east. Despite the fact that Malang has undergone a major expansion, the city has still retained its historic character for a significant proportion. The colonial architecture is still visible at various places. The Town Hall (Balai Kota), the ancient Catholic Church and the Reformed Church are typical examples thereof. But also along the Jalan Ijen – a nice wide flower-lined boulevard – one can see beautiful colonial buildings. Near the Alun-Alun – the central square – is also the well-known restaurant Toko Oen where everything still seems to have remained old. Also the flower-  and bird market and not to forget the lively market Pasar Besar are worth a look. This applies equally to the Ang Eng Kiong Temple in Chinatown. Not far from the city are still some nice attractions. Thus located 12 km north of Malang is the unfinished Singosari Temple from the beginning of the fourteenth century. This was dedicated to King Kertanagara, the last king of the Kingdom Singosari. About two hundred meters from the temple are two impressive gatekeepers (dwarapala), intended to ward off evil spirits. Approximately 30 km north of Malang is on the slopes of Mount Arjuna the Wonosari Tea Garden. Here one can not only see tea pickers at work, but it’s also possible  acquainted with the entire tea production process in the tea factory.