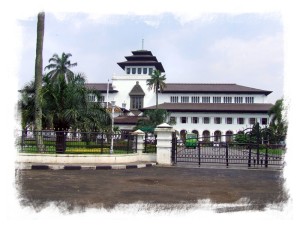 Bandung has  2.5 million inhabitants and is the capital of West Java and the informal capital of the Sundanese, the predominant population of this Javanese province. Because of its cosmopolitan character the city was formerly known as the "Paris of Java". Due to the enormous growth of the city and the attendant traffic, however, this character is lost.

Nevertheless in Bandung still some fine colonial buildings from earlier times of splendor can be found, such as Gedung Sate and Gedung Merdeka. In addition there are some beautiful art deco buildings to see including the famous Hotel Savoy Homann, the Grand Hotel Preanger and the Fair Centre. Today Bandung is a real student city with over 25 universities and colleges. In addition, the city is known as the textile center of West Java. Many Indonesians - but also Malaysians and Singaporeans - come here for the Factory Outlet Stores, where cheap clothing can be purchased.

A nice experience is attending an Angklung-performance at the school of Angklung - Pak Udjo. The angklung is a musical instrument consisting of hollow bamboo pipes of different length in a frame which can be moved sideways in order to produce sound. The presentation given at the school of Pak Udjo includes both Sundanese music and dance demonstrations.

Surrounded by mountains and volcanoes Bandung has a number of attractive tourist attractions in the vicinity. About 30 km north of Bandung is the still active volcano Tangkuban Perahu. The crater rim of the 2084 m high volcano is even accessible by car. From the edge one has a magnificent view of the steaming crater. Not far from this volcano is the village of Ciater, which is surrounded by tea plantations. Also here one can often see tea pickers at work with their distinctive hats and baskets. For those who want to know more of the tea production it’s possible to make a tour of the Walini Tea Factory, which is located here. The most famous attraction of Ciater however are the Ciater Hot Springs where you can relax in one of the volcanic hot springs.