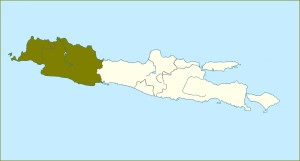 West Java, or rather the western part of Java, is the most densely populated area of Indonesia. This crowded region is home to more than 50 million people. About 20 million of them live in the metropolitan agglomeration around Jakarta, often referred to as Jabotabek (a contraction of Jakarta-Bogor-Tangerang-Bekasi). That means that nearly one of five Indonesians is living in this part of Java. Western Java shows as no other area in Indonesia the contrast of the modern city 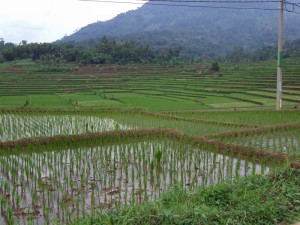 and the countryside with its natural splendor. On the one hand metropolises such as Jakarta and Bandung, where the traffic is huge, on the other hand the countryside with its sometimes dreamy villages amidst the characteristic tea plantations and rice fields. Because of the rich history, the colorful culture and natural beauty the area may rejoice in an increasing interest from tourists. It is also in this area where the colonial era began. Remnants of which are still to be found especially in big cities like Jakarta, Bandung and Bogor. West Java is the original birthplace of the Sundanese. They form the largest ethnic group of the region. Bandung, the capital of the province of West Java, is considered the cultural heart

of the Sundanese. The colorful Sundanese attach great importance to tradition, which is reflected in many areas. Many native Sundanese arts here are as a result highly developed such as typical forms of Sundanese gamelan and  angklung music. Or the wayang golek, a traditional puppetry with wooden shadow puppets. Further inland, one can enjoy the beautiful nature. Beautiful mountainous landscapes with green valleys and high volcanic peaks. And of course the many typical tea plantations and rice fields, especially around Bandung and the Puncak Pass. On the southern coast is Pangandaran that rapidly is gaining popularity with beach lovers and surfers with its wide beaches and attractive surfing possibities.